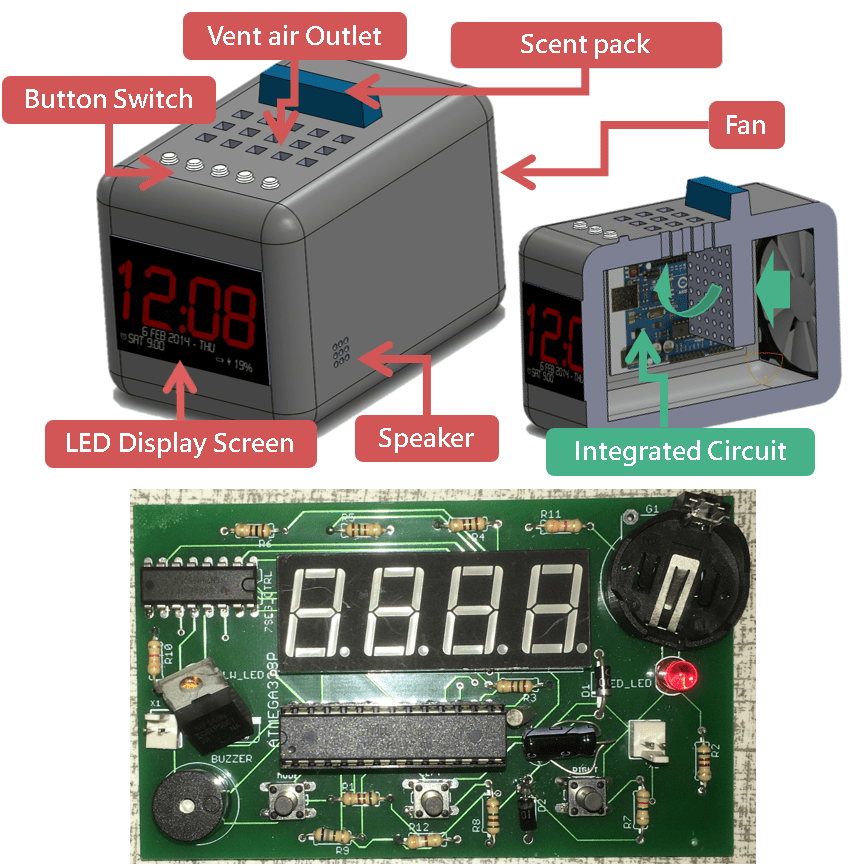 As an old saying goes, “An hour in the morning is worth two in the evening”. What we encounter and conceive during this period is largely intertwined with our whole day. However, what is the most important thing that we encounter in the morning? It is about waking up. Nowadays, we wake up by the noisy, buzzing sound of an alarm. How would it be like if we could wake up by a scent, a fragrance, wiping away the unsatisfactory memories of the past? What can be changed to fulfill a better awakening?

An aroma alarm clock should fill in the answer. When I was a junior, I enrolled in a program called “NTU Creativity and Entrepreneurship Program” (NTUCEP). In this program, students with similar ideas form groups and learn about entrepreneurship by practice. After a couple days of brainstorming, our group came up with the concept about developing an alarm clock that can wake people up using scent packs. Apart from being awakened by a loud ringing sound of an alarm, fragrances (as we had proposed) have a milder, progressive effect for waking people up. We named our product “Sensio”, a Latin noun of the meaning “thought”.

In order to verify the market demand of this proposal, we devised a questionnaire for investigating the views and habits of people about waking up, which 1320 valid responses were collected. A score of 0 ~ 7 is used to quantify the “discomfort level” for waking up, in which a level of 0 ~ 3 is regarded as painless, and 4 ~ 7 as painful. Fig. 1 shows the discomfort level distribution of all the samples, and Fig. 2 shows the distributions by occupation. It can be seen that regardless of identity, the majority of people feel painful when waking up (students: 71%, office worker: 62%, other: 51%, overall: 68%). Moreover, we analyzed their habits of lying in bed after awakening. Fig. 3 shows the proportion and durations for lying in bed. Accordingly, over 44% of people lie in bed for over 15 minutes, and the average duration is 15.07 minutes. Theoretically, this means if a product could help lower one’s discomfort level of waking up, and reduce the duration of lying in bed after awakening, he could approximately increase 3.8 days/year of effective time. Not only having a favorable morning, but also enhancing his work efficiency.

Figure 2. Number of people vs discomfort level by occupation.

Figure 3. Duration of lying in bed after awakening.

From the above analysis, we became confident about the large market demand for a better quality of getting up. For me, being the leading engineer role in our group of six meant turning ideas into reality. This had been a difficult period but a time of inspiration and excitement. I put into practice what I had learned within the past few years for developing a system, a hardware that can really be used as a product.

I developed two preliminary versions of the hardware, with the 1st version using Arduino as the CPU (Sensio v0.1) (Fig. 4). In this version, an Arduino chip, a time clock module (DS1302), a shift register (74HC595N), relays, button switches, LED displays, a buzzer, a fan and a potentiometer are used for the alarm clock (Fig. 5). 10 different themes are written inside the system and a few simple features are integrated within (Fig. 6 details every mode of the alarm clock and the corresponding function of the buttons). This version serves as the proof-of-concept version for making an aroma alarm clock. Although being simple and somewhat rough, it demonstrated to my team and our professors a solid proof and feasibility of our objective.

During this period, we earned 40,000NTD in a fundraising event in our program, and won the Best Potential Award in the 14th NTU innovation competition. Fig. 7 shows the poster we had used in the competition. During that period, we had great enthusiasm and motivation, and dreamed that one day our product would become on-sale and we could establish a real listed company of our own. We entered the NTU garage, which is an incubator for startups that are closely linked to NTU.

Figure 7. Poster of product Sensio for the NTU innovation competition.

The second version Sensio v0.2 was created during my second semester as a junior. This time, an IC chip (ATMEGA328P) is used as the CPU rather than Arduino in order to lower the cost of the system and decrease its volume. Moreover, a PCB layout for fixing electronic parts on a solid panel is used. Fig. 8 illustrates the structural model of Sensio v0.2, Fig. 9 shows a photograph of the integrated electric components and its corresponding PCB layout schematic, and Fig. 10 shows photographs of the laser-cut 3D outer case.

Figure 9. Electronic component-integrated PCB board of Sensio v0.2 and its corresponding layout schematic.

We were thrilled after these accomplishments, since never had a team of the same period achieved such a high level of completeness, especially when concerning the integrity of hardware and software. These remarkable things happen so quickly, so fleeting for us to catch up with. The truth is, we are still so far from success, since we were still students back then. Reality pulled us back, and we started asked ourselves: are we ready to give up some things and dedicate ourselves to entrepreneurship? Our dream product, the aroma alarm clock, had once seemed so close, yet had never seemed so far.

Although in the end, the functional aroma alarm clock wasn’t successfully made, what I’ve learned during this event is unprecedented compared with my past experience, not only techniques for hardware and software development, but also important philosophies for entrepreneurship. This project inspired me to a great extent, and enabled me for creating future hardware-related projects (e.g. Automated Microfluidic Controlling Platform, Real-time Impedance Detection Systems, Surface Plasmon Resonance Platform) in my own field of research.

Figure 11. Photograph of our team and professor.